Dancehall artiste Donaro is going through a painful divorce, and his rocky relationship formed part of the inspiration behind his radio hit, ‘Gimmi Bun’. The song features a bit of brilliant social commentary as the singjay expresses an unusual desire to get a girl who can “give him bun”.

“This song is mostly inspired by what’s going on around me now, I accept the idea that I may get bun, there is no jealousy in my game. The song is partly inspired by my own relationship, I am going through a divorce right now so you know how that go,” the artiste whose real name is Donaro Stanford, said.

The song, released on the Real Yutes Production in May 2020, has become a fixture on dancehall mixtapes, and is getting airplay on IRIE, ZIP, Suncity FM and other radio stations.

“People love the topic and the song is growing rapidly because of the uniqueness of the topic , it’s hot but not too touchy to discuss. Each female really wants to be free to determine her own destiny, that’s the new trend.”

But the subject of infidelity and its offshoot, domestic violence continues to be a sensitive topic in Jamaica. There have been several highly publicised incidents of fatal domestic killings. Earlier this year, there was a murder/suicide involving a Jamaica Defence Force (JDF) Corporal Doran McKenzie and his common-law wife. Another case involved a 30-year-old man, Andre Bromfield who was charged with murder following the shooting death of a woman at a food store on South Race Course Road, Mandeville. There was also a stabbing death of a woman in St. Elizabeth by her estranged lover in January of this year.

“Jamaican man no like get bun, and they are very possessive but they have to change their perspective. Men want to be free to do what they want to do, if they understand that women should be equally free, it may lead to better relationships and fewer domestic situations where violence comes into play. I don’t condone violence against women,” he said.

Jamaican women are second on the list of those likely to be intentionally killed, mostly by a partner, according to statistics presented by the United Nations.

Countries topping a UN-compiled list of “intentional homicides, female” are mostly in Latin America and Africa, regions which struggle with gang and ethnic warfare, unemployment and deprivation, according to a media report.

Born in St. Catherine, he grew up in the community of Dela Vega City, then Old Braeton, and at the age of 11, he began playing with words and rhymes. He continued to hone his skills while he was a student of Excelsior and then Manchester High. He joined the ‘Talk About Dance’ group during the period of 2002 to 2007, and he began writing songs for artists such as Spice, Junior Reid, Macka Diamond, and others. He undertook and completed a nine-month certified practical degree in herbal medicine at the University of the West Indies, Mona Campus.

With a unique style of his own, Donaro imbues his music with real sweet wise swagger and urban values.

He is known for songs like “Dawgs Dem Relevant” on Raise the Bar Rhythm, and “Quick Cash”.

Wed Sep 2 , 2020
Female producer-songwriter Prudence Plummer is amped that her latest single, ‘Hot Song’ by perennial dancehall hitmaker Blacker and Tabeta Cshae, has been added to the playlists of major radio stations in Jamaica. “The early feedback has been very encouraging so far, the song has been streamed several thousand times online, […] 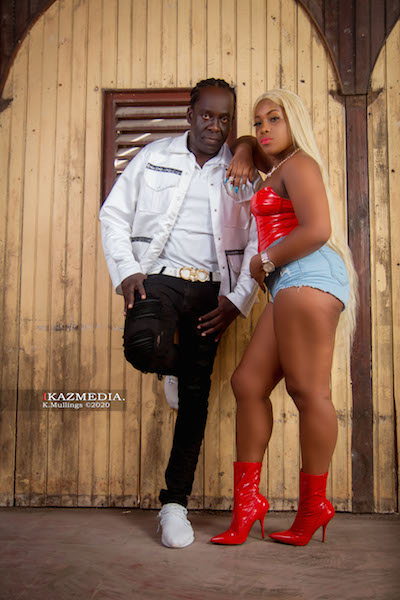