It’s been a long journey for gospel singer Chrissy J. After a long battle with health issues as a global pandemic raged around her, it was her unstinting belief in God that sustained her through her struggles.

“God is my everything. I have an affliction called GERD (gastroesophageal reflux disease), I was short of breath a lot, spiritual battles, I had all sort of anxiety issues. I was so ill I couldn’t go to school for several days, it felt like my legs were shutting down. I had to get medication…prayer brought me through, the pain was so bad it was something I wouldn’t even want my worst enemy to go through, but my God sustained me, and saved me,” the 38 year-old guidance counsellor-teacher said.

After her ordeal, Chrissy J recorded and released a single, ‘Your Touch’, which was released on the Smartkid Records label in November 2020. The song is written in romantic overtones expressing her for love for God.

“It’s my first intimate song, I wrote it at a time when everyone was singing love songs to their partners. I saw that in most cases men fail, a lot of relationships were just not working, so I asked why sing to persons who fail? So I said to God, ‘I want to sing passionate love songs to you’. I wanted to sing intimate songs to Him,” she explained.

Christians are often more fond of worship songs than other forms of Christian songs, but she said her fellow church members at the Victory Deliverance Centre on Molynes Road, have been very supportive.

“The church members have been great, they have been sharing it. Love for God takes many different forms, if you read the Book of Solomon, you can get to some levels where that love is so passionate, I know what it means,” the Christian of 20 years said.

The song has accompanying visuals which have been released on Youtube, and the song is available on all major download platforms including Spotify and iTunes.

Born Christine Small, she grew up in the Kingston 20 area with a strong passion for ministry and people. I started singing at a very early age. In high school, she was inspired by pop superstars Celine Dion and the late Aaliyah. Chrissy J got saved at the Victory Deliverance Centre in 2001, the same year Aaliyah died in an airplane accident in The Bahamas.

“My dream to be an artiste went with Aaliyah. I then started to write poems to express how I was feeling coping with different situations still being young, this further developed into the writing of songs, then into writing worship songs,” she explained.

In 2018 -19 I travelled to Turkey to teach English and joined a African church called the Redeemed Christian Church of God. She joined the choir, and it was in Turkey she did her first recording in the studio, a song called “Can’t You See the Kids are Dying”.

“I love to minister in song to the congregation, it is one thing to have a voice but sometimes it is more than a voice, I become a conduit, delivering to them a message from God using my voice,” she said.

Chrissy J had always dreamed of recording a gospel song in Jamaica, and she said that God promised her if she “continued to abide in Him, she would be rewarded”. Now that promise has been fulfilled.

“Recording is a dream come true,” she said.

Wed Feb 17 , 2021
A woman administered a merciless machete-wielding beat down on a hapless male in a video that went viral on social media yesterday. “We are aware of the video, but there is no active investigation because we are not sure if it is a long time video, outside our jurisdiction, but […] 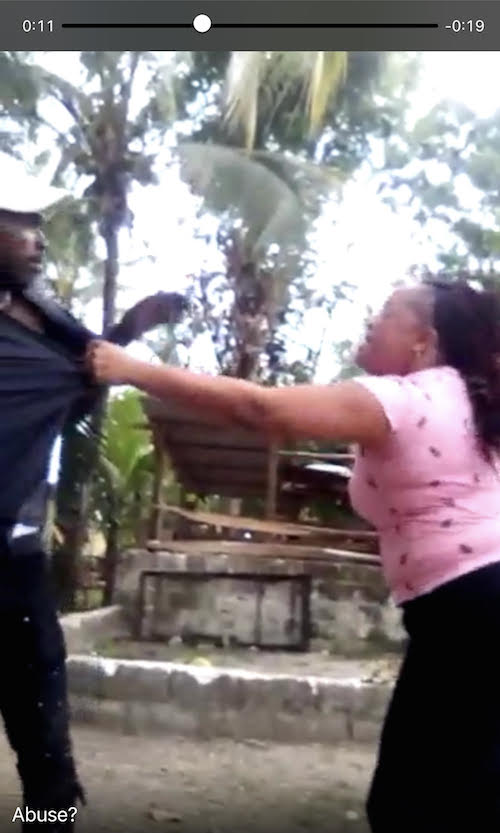