Dancehall artiste Black Queen, after a harrowing ordeal at the hands of would-be extortionists, is fighting back by being very vocal about her experience.

“I am not holding back, I am talking from my heart about my experiences, we are living in too much fear in this country, and this spirit of fear is allowing the minority, these thugs to hold us hostage, but no weapon formed against me shall prosper,” Black Queen said.

She has been living in fear after alleged extortionists fired a volley of shots in the yard of her home in Tower Isles area on Monday night in St. Mary.

She has reported the incident to the Prospect police. But she is not waiting on the cops. She wrote and recorded a single called ‘Extortionists’ on her own BQ Productions label.

“I will be releasing the song next week. Since the story came out, a man contacted me on Facebook to say the same thing happened to his daughter. She started a construction on her home but the guys didn’t know what they were doing, she stopped them, but they still wanted the money, and eventually, they shot up her car. A lot of these things are going on, unreported,” she told BOUNCE876.COM

She explained that the extortionists were upset that she had hired rival contractors to do construction work on her home, and had resorted to intimidation and thinly veiled threats to extort money from her.

“I met some guys who claimed they were contractors I ask them to look at a job and tell me how much It would cost to get it done, and they told me $80,000 at the time. The job consisted of paving off a room and dressing the wall. I got suspicious when they should have been flashing and dressing the wall, and wanted to tile the floor without the electrical piping being done. I realized what was happening so I told them I had to put a hold on the job and I would contact them until further notice, I already had given them a down payment of $33,000 dollars at that time,” she told Loop reporter Claude Mills.

However, that was just the beginning of Black Queen’s ordeal with her contractors-turned-extortionists.

“I hired some other people who where proper contractors who completed the job and more, before I could call them they came to my house and realized that the the work was already done, they became upset and I gave away the work and they needed $10,000 dollars more, I reminded them that they were the ones who owe me and they should leave and not come back to my house as I am entitled to hire whomever I see fit to do my job. They came back again and I was not home, my two two girls were there and heard them threatening that they want $40,000 or else they were going hurt me or my kids,” she explained.

She immediately reported the matter to the police.

“While reporting the matter, they called to say they were going to shoot up my house if they don’t get some money. The police went there but did not made an arrest but warned them not to carry out their plan. This happened on Saturday. On Monday, they did come with long shot gun and they fired shots like they were the police walking around with not a care in world. I now came to understand that there are dangerous people who go around extorting people and they are also involved in killings and robberies. I am hopeful as the police know about the perpetrators who frequent Port Maria,” she said.

She then made an additional report to the cops.

She warned other Jamaicans not to be taken in by extortionists posing as building contractors.

“Be careful who you bring to your residence to work because some are scammers or robbers who come to scout out your place so they can come back and terrorize you, rob and even kill you,” she said.

Tue Oct 1 , 2019
Cult celebrity actor Louie Rankin – famous for his role as Ox in the movie, ‘Belly’ – died in a car crash in Ontario, Canada. TMZ confirmed that the incident occurred adding that details were scarce. The crash reportedly involved a transport trauck and another vehicle. Paul Campbell, who worked […] 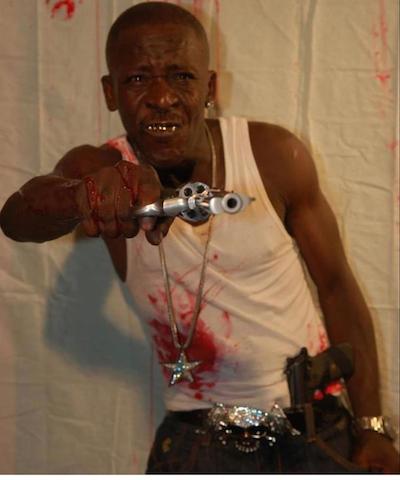