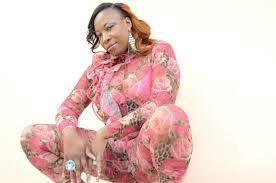 The ‘Money Goddess’ Macka Diamond premiered her latest video, Shake, this week during a HYPE TV up and Live programme .
“We ah shake up this Chirstmas. The song is getting a lot of spins overseas, my Instagram account is blowing up each time with videos from fans dancing to the song in clubs, so I feel great about this song, God is great,” an enthusiastic Macka Diamond said.
The song was inspired by a dub plate that she recorded for French broadcaster Marlon “DJ Coss” Young several years ago. The vocals were remixed by DJ Coss on a new Afro-beat and the song has been blowing up parties and clubs all over the French diaspora.
“The dub plate is called ‘Play Tune, Play Tune’ off my hit, ‘Done Already’ years ago. So DJ Cross decided to put the song on a beat that ah mash up the French islands and it took off,” she said.
The dub plate remix has gone viral spawning a phenomenon called the Tumentends Challenge where thousands of residents of the Guadeloupe, Martinique and French Guyana  have posted videos of themselves dancing to the song. Even French celebrities and sports stars have posted videos of themselves on Instagram dancing to the song.
On the local front, Macka Diamond’s ‘Shake’ song is enjoying favourable rotation on HITZ, IRIE and ZIP. The song is produced by New York-based producer Dorian Besson and well-known producer Michael ‘Yahbell’ Bell on their new Minx riddim on the Brukkout Production label.
“The video will be released next week, the song is doing very well in the street dances all over the Corporate Area as well, the selectors say ‘Macka yu find it again!’,” she said, laughing.
In the meantime, the star’s  ‘Chinese Jordan’ counteraction video has been generating a lot of heat on social media, with some fans praising the track on Macka Diamond’s YouTube and Instagram. The song is also on Blacker’s Top 20 chart.