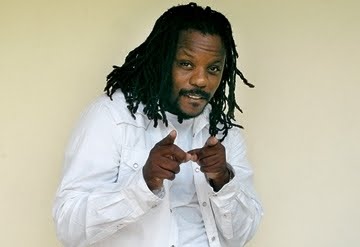 Since Chuck Fenda’s breakout single, ‘It Hard’ has become  a radio anthem for the underprivileged facing tough economic times, the artiste has become a hot ticket for stage shows across the island because of his explosive live performances and powerful repertoire of songs.

He delivered an incendiary performance recently during fellow artiste Bush Man’s stage show in St. Thomas. Attired in a dapper full suit of blue jeans, he hit the stage at about 1:45 a.m., and immediately ignited the crowd with his hit, Warning. Then he segued into his most recent chart hit, ‘It Hard’, and the 4000 strong crowd sang along word for word. Warming up to the crowd, Fenda then blazed a medley of his hits such as ‘Gash Dem’, ‘I Swear’ and ‘Cry for My People’.
After doing a torrid 25 minute set, the audience did not want to let him go and continued to chant ‘done in ya Fenda’ but he had to limit his stage performance because other artistes were waiting to perform.
“I felt like a new artiste performing for the first time, the crowd showed me crazy love,” Chuck Fenda said.
Prior to that event, Fenda performed at the Bob Marley Birthday Celebrations held in Trench Town. Called onstage by reggae firebrand Iba Mahr, Chuck Fenda was in brilliant form, as
he had the audience waving their lighters in support for his argument to ‘Free Buju Banton’.
He will be one of the headliners on Gary G’s Kite Festival on April 1st in Ocho Rios, and he is booked for two shows on March 31st, a club show in Negril and the Boston Jerk Festival in Portland. He will also perform on the Manchester Awards on March 9th and in the  Amazura nightclub in New York on April 13th.
“Things are looking very promising, I have General Degree’s show in Manchester and Reggae on the River in California later this year, people are responding to the music,” he said.