In 2002, Mr. Glendale Gordon was arrested and during the course of the trial Mr. Gordon did the unthinkable… he “ran”.  He fled the United States and headed for his childhood home, Jamaica. Now, ten years later, Mr. Gordon’s past is back to haunt him, resulting in him being extradited to the U.S. to face charges of “failing to appear”.  At this point one can only assume what compelled the then twenty-two year old Gordon to flee before the trial had started. Whether it was the fear of facing a jury, uncertainty of what lay ahead, or the simple feeling of being overwhelmed – we can never be sure, but what we know is that now is the time when he will have to answer to “running”.

It is undisputed that crimes committed must be atoned for, and we have a civic responsibility to ensure that individuals who have done wrong be made to pay.  However, is there any individual who in retrospect has not had feelings of shame and remorse for things done in the past? For every person there have been moments where, if given the opportunity to reenact those scenes in our lives, we would make alternate choices.   Unfortunately life does not come with a “REPLAY” button, and we have all learnt to learn from our mistakes and move on.  It is often said, that a person’s character is the result of their past experiences, and these experiences form the basis for future choices.

We as a music fraternity believe that it is that experience of Mr. Gordon, that has served its purpose to bring to the forefront the cultural icon we now call “Busy Signal”.  In following the musical career of “Busy Signal” for the last eight years since making his debut on the music scene with the hit single “Not Going Down”, we have seen the work of this artiste show significant strides of intellectual growth, cultural awareness and personal development. Transitioning from tracks such as “Step Out” very early in his career to popular covers such as “One More Night” and “Night Shift”, Busy Signal’s growth as an artiste must be commended, with the consistent improvement of his craft culminating in the release of his all reggae album in May 2012.  Entering the Billboard Reggae Charts at #5, this artiste’s career catapulted to a new level surprising not only fans, but the entire fraternity, as it was rare that a traditional dancehall artiste could leverage his raw talent to deliver so capably in the Reggae genre.  Benefiting from the contribution of one of Jamaica’s finest at this time, once again the true heritage of reggae music can shine through as a part of our culture that we can be proud of and hold in high esteem.

We have seen time and time again, how music has the power to transform lives, and how it can inspire us to reach into ourselves and bring our best hopes, aspirations and ideals to the forefront. It is against this backdrop that we as a fraternity have seen this individual evolve and virtually become one of the best and most positive role models for our young people.

It is never the intention of any legal process to turn around a worse individual after the course of justice has been completed.   The objective of punishment is ultimately the hope of rehabilitation and reform, taking into consideration that this individual would have had time to reflect and recondition the mind to make better choices.  It is our belief that “Busy Signal” has personally achieved that which the judicial system has intended for each individual it has passed down a “guilty verdict to. This case has touched a different chord in each and every Jamaican, because “Busy Signal” has managed, against all odds to achieve what the judicial system seeks to do in each person that has been faced with incarceration.

Amidst the struggle to keep our nation’s children grounded and keeping the hope of a better day alive, we are confident that we can be moved to use the story of this young man as a true testament to inspire positive change and success through hard work and dedication. We must seek to encourage our young minds to believe in themselves, through the realization that it is possible to make bad decisions and successfully thereafter turn their lives around.  It is against this background that the music fraternity is compelled to petition for leniency on behalf of “Busy Signal”, with the knowledge that indeed a crime has been committed but undoubtedly this person has also been rehabilitated.

In closing, we the reggae music fraternity, feel that this is one of those pivotal times, when we should stand behind all the ideals we have been espousing.  We feel that this young  man has demonstrated time and time again that he is indeed a changed individual from the young and misguided youth of some 10 years ago. We feel deeply that he has embarked on a musical  journey and he should be given the opportunity to further inspire  the young  Jamaicans and youths of the Caribbean who now look up to him.
We therefore unequivocally lend our voices to this petition to intercede on “Busy Signal’s” behalf and to further buttress the case for his kind rehabilitative return to doing what he does best, which is to uplift the society through music.

Sun Jun 24 , 2012
<p> <img class=" size-full wp-image-954" alt="" src="https://www.bounce876.com/wp-content/uploads/2012/06/khagorolldeep.jpg" width="400" height="460" /></p> <p> Khago performed in St. Thomas last night during Ballas Splash at Linval Lawn in Morant Bay, earning a big forward for 'Nutten' on the Dufflebag riddim and his Tun up the Ting hit. The deejay has been involved in a lyrical feud with rival deejay Sizzla. He stated his case clearly on last Friday night's Entertainment Report programme on TVJ. Watch it below. </p> <p>  </p> 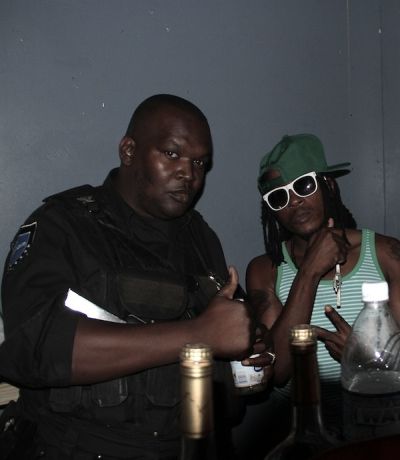