“We’ve been working heavily in the Spanish market for a few years now and just started doing dancehall juggling since this pandemic started,” Red Rat, whose given name is Wallace Wilson, said.

The production team made major waves when it released a rhythm project last year called “The Kwarantine Riddim” which featured artistes like Ding Dong, Tifa, Bay-C, Red Rat & Pascalli. Now, the team is looking to up the ante in 2021.

“We have our new project dropping on February 19th, 2021 called “Drop Top Riddim” which features me, Pascalli, Wasp, Badda General & Tarnado. We have so many more projects to drop but Covid slowed down the entertainment industry drastically so for now we are just dropping a few singles to keep the vibes going and give the people good music to listen to until the place opens up again,” Red Rat said.

Red Rat broke onto the music scene in 1996 and is known for tracks such as Big Man Little Yute feat. Goofy, Good Boy, and Charlene. His 1996 debut album Oh No….It’s Red Rat! was reportedly one of Greensleeves Records’ best-selling albums. In 2009, Red Rat rebranded himself and was offered an opportunity to become the President of A&R/ Musical Director at an independent record label called Infinity Moguls Inc. He began working with a young female artist named Pascalli, who is his business partner with Infinity Moguls.

Pascalli is an American singer, songwriter and producer of the Bahamian and Dominican descent. She got started in music when dancehall musician Red Rat discovered her while working on a movie set in 2010. In December 2018, she reached over 20 million streams and counting on Spotify for a song she co-wrote called “Higher” for Red Rat and was awarded a plaque for her accomplishments.
Attachments area

Wed Feb 17 , 2021
Nine-time Grammy Award winner Rihanna posted a racy topless photo of herself while wearing purple silk tap shorts from her Savage X Fenty line while dripping in amethyst jadeite jewels made of her birthstone. It seems the singer, who turns 33 this week was really feeling herself as her birthday […] 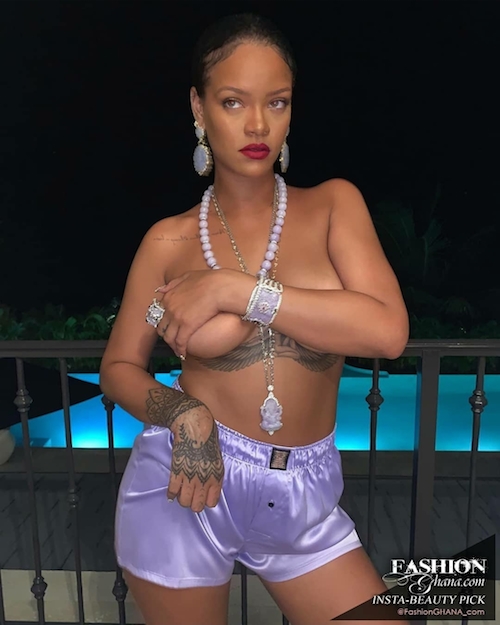